The Cleanest Gator in the Sewer: Where’s My Water? 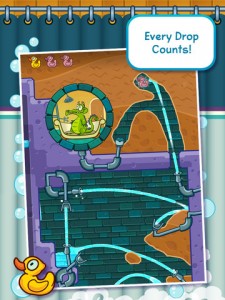 Help swampy the hygienic aligator that lives beneath the city get clean. Cranky and the other gators don’t appreciate his cleanliness and are attempting to sabotage the water system to swampy’s bathtub. This game will be a huge hit with the kids. A simple physics puzzler with a very gradual difficulty incline. As they say easy to learn difficult to master.

The idea is to get water from the pipes to the bathtub by digging through the dirt. In reality this would be some pretty dirty water that eventually makes it to the bathtub, but swampy doesn’t seem to mind and the graphics don’t reflect this conclusion either. There most be a nice water filter hooked up in swampy’s house.

Water isn’t the only thing coming down the pipe, there is some purple gunk, some green acid and other things. As you can assume, this is not what needs to make it to the bathtub. In addition, there are plenty of other physics challenges that get thrown at you during your progression through the different levels. Once you figure out one technique they’ll throw something new at you.

Where’s My Water? has over 100 puzzles with more to come. This app will be sure to entertain you for hours. It’s a universal app and at only .99 it’s a terrific deal.

Of course this is a huge app approved game. If you haven’t picked it up yet do it right away. It’s on the same scale as Angry Birds, and if Disney decides to keep adding levels it will compete nicely with the reigning app store champions.